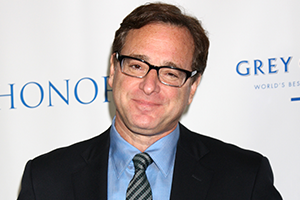 Nearly every generation has a TV show or a character, that is a large component of your upbringing. For many of us as children, we welcomed television families into our own family rooms. We’d let them into our most personal and sacred of spaces—our homes. Sometimes that included watching with our parents or siblings—a few would even discuss episode themes with each other and how what they saw reflected and applied to their very own lives. Not only that, but they became part of our friend group as well. Once a week, we’d all tune into our favorite show and first, experience it with our families, and then our friends at school the next day. There was always something so comforting to know that we all were enjoying the show at the same time—a simultaneous human connection that led to dialogue, even amongst elementary school students.

For myself, that’s Uncle Jesse, Joey, and most of all Danny Tanner from Full House (1987-1995). No matter the type of household we each had, Uncle Jesse was there for, and with us, with his music, Joey with his jokes, and Danny Tanner with his broom, mop, hugs, and heartfelt words of advice and expression of inner turmoil.

All of us were exposed to grief from a young age, watching him over eight seasons, raise his three daughters—and even their next-door neighbor Kimmy—after losing his wife. “Talking about it. That’s what helps me. Talking about the memories. That’s what keeps them in your heart,” Danny said, not shying away from the very difficult topic at hand.

On January 9th, 2022, I got a text message from a friend that just said his name—Bob Saget. There were no emojis or context of any kind. I then got a similar group chat message. It soon became clear that Bob Saget’s death sent ripples through my friend group. And while, yes, we mourn his loss, we also mourn the loss of Danny Tanner. A friend of mine said, “I know we can still watch it, but it feels a lot heavier without him alive.” It dropped a weight that wasn’t there before.

According to popci.com, “In a 2013 paper in the Journal of Consumer Research, marketing experts studied people’s responses to the end of so-called “narrative brands,” which many follow along with for years, or even decades.” Full House was this for us, and it wasn’t limited to the time the show ran. We were especially clinging to this person, this character, during the pandemic, and other global stressors, when he passed. Danny was dependable—stable and always there, always funny, always comforting, but never too serious.

Danny Tanner was there for some of the most formative years of my life and continued to be even in reruns. Through these reruns, we got to continue to experience the world of Full House. And for some of my friends, he was one of the only parental figures in their life. Danny Tanner hugged without abandon and loved fiercely, even after his entire life abruptly fell apart. And although Bob Saget is also known for his more provocative stand-up and America’s Funniest Home Videos, he was always more than that for us, and he embraced all the parts we loved and needed most. Saget told The Times in 2016. “I came up with that. I made him a hugger. That was one of my contributions.” For some close to me, his constant hugs—or a lean, mean, hugging machine as he called himself–showed them that these displays of affection were okay and that not every family struggled with it like theirs. It gave them hope for their future families.

In 2016, we got Fuller House, Full House’s Netflix sequel. When asked about the return to Fuller House, Saget said, “There’s a lot of the anecdotes we’ve heard through the years: ‘You helped raise me’ or ‘I would watch this with my mother or my father.’ I think that the show made a heartfelt impact on people — that’s why it’s exciting for people for it to come back.” Yes, it was exciting for people to return and for us to see them, but it has become something more. While the show mainly focused on two of his daughters and DJ’s best friend, Danny Tanner did return several times—and he returned to a house that looks nearly identical to the original. We’d seen him in this role, a role that meant so much to us, so very recently. Perhaps this is also why it affected us the way it did.

Bob Saget was a beloved comedian, actor, television show host for many. His career spanned decades, and will always be remembered for bringing joy, laughter, and tears into our living rooms year after year.

Read more of our blogs here.