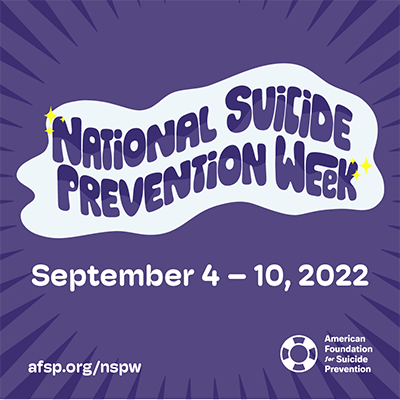 According to the National Institute for Mental Health, suicide is a leading cause of death in the United States, with over 45,000 people in 2020. It’s the second leading cause of death among individuals between the ages of 10 and 14 and 25 to 34. That’s an awful lot of young people as the instrument of their death And an awful lot of sorrow in its wake.

You’ve heard us refer to the accepted equation for bereavement—nine persons for every one person who has died. That means multiplying 9 X 45,000 will give you a picture of the number of bereaved people over the cause of suicide.

It’s a lot of pain, a lot of suffering. It’s a lot of grief. Journeys through Grief is joining suicide prevention organizations across the United States during September to lift up suicide prevention. We want to bring you notices, thoughts, support, and information to hopefully bring this cause of death out of the dark ages and make it available for care, compassion, and support like any other cause of death.

Check out the links at our website Journeys Through Grief for more resources and programs available. https://www.journeysthroughgrief.com/resources/suicide-resources/