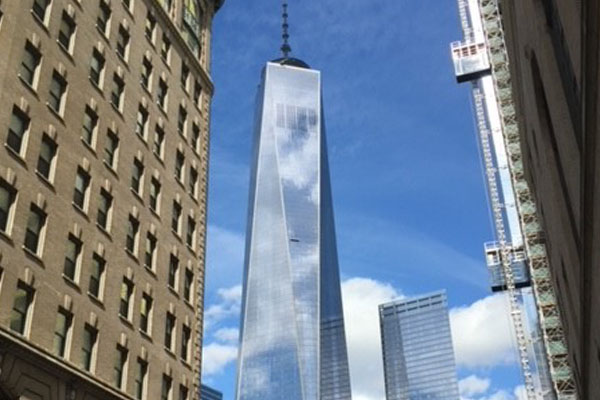 That is a question asked of those who remember the assassination of JFK. It is striking that however long it has been they can still remember vividly that moment.

Where were you when JFK was assassinated?

Now we ask that question again. And for younger generations, it pings a part of our brain that takes us back…

For the younger generations, this question pings a part of our brain that takes us back to one that we don’t want to remember at all. It brings us back to a time before—we now live in after.

It reminds us of a day we’d never like to re-live. It brings us back to an equally vivid memory of watching, live on television, nearly 3,000 humans not only suffer as they awaited help but die right before our eyes. We saw thousands of us humans confused, frightened, and attempting to flee whatever danger came next.

I woke up on Tuesday, September 11th, 2001, ready for another day in eighth grade. It was only our second week, and I had made a new friend that would end up being a life-long one. But the day would quickly change. I started eating breakfast and my Mom turned on the morning news.

A plane, or what we thought was a helicopter at the time, had crashed into one of the towers in the World Trade Center. I watched the smoke and bright orange flames pour out of the top of the tower, contemplating, with my teenage mind, what could have gone wrong. I saw firefighters and police running, not knowing what was happening, but willing to help no matter the cost.

And then the second plane hit live on national television.

There weren’t many details that emerged by the time my mom had to drop me off at school. When I made it to 1st period English, we knew it was an attack on our country with the intention of killing as many humans as possible. My teacher had the news on, with the sound muted, while we took our seats. Miraculously, we sat there quietly for once. Imagine that, thirty thirteen-year-olds still and quiet from the unknown. My good friend Erik sat to my left, his hands resting on a book he had brought for his book report presentation that day.

At this point, we knew a plane had crashed into the Pentagon and another in Pennsylvania as well. What was going on?
Where were you?

With the television on a low volume, we all stood up to do the Pledge of Allegiance as normal.

One nation. Under God. Indivisible.

Hand over heart, thirty of us mumbled the words as our attention was both on the images on the screen, but also on our teacher. We looked to her for guidance and comfort as we wondered where we were going from here. What do we do now? These kinds of things didn’t happen here.

My teacher said the Pledge with us through heavy sobs.

That’s when the numbness of the morning quickly shifted into extreme fear and worry for us kids. Our teacher, the only adult in the room, had broken down.

Was Los Angeles next? Were schools next? But we stayed there, somehow expected to make it through our classes normally, while feeling unsafe no matter who we were with.

She turned off the television, told us that it was a terrorist attack, and then she wheeled out the projector and started the day’s lesson.

The news was still on when I got home and all the way through the evening. Not only did we see images of the aftermath, and the attack, replayed over and over, but we saw people jumping with no other option. We saw the towers fall and the smoke envelop a city. It made New York City disappear.

If you take/took a close look at their faces as they ran in the streets, and later that evening, family members and friends desperately searching, you saw/see sadness. But in addition to that, you’d see anger. Pure anger as hundreds of MISSING faces printed on white paper lined the walls.
Where were you?

How dare they put first responders in danger, knowing full well they’d run in to save lives at the expense of their own.

How dare they create the permanent line between before and after in the same lifetime.

In 2015, I was able to be in New York City when they first opened the newly constructed One World Trade Center. This momentous occasion left a sadness in the air. I remember getting off the subway and immediately looking up—the skyscraper a deeper shade of blue against the light blue sky. It appeared to touch the heavens as it reflected the puffy white clouds and afternoon sun.
Where were you?

The memorial fountains were nearby, with water flowing down the sides and deep into ground zero. The names of the dead are inscribed on the memorials. The sight of so many names, the birthday roses, and the sound of the water created a heaviness in my chest that I’d not yet experienced. Memories of that morning, the weeks… months….in 2001 came flooding back. The lingering, constant, fear embedded in us from that day, still lingers when we flinch at an airplane flying a little too low overhead. Or when we see an argument unfolding in an airport. Or in large crowds.

This was a large crowd.
Where were you?

Feeling tense and panicked all over again, the sound of bagpipes filled the air.

Amazing Grace, how sweet the sound.

They took over the anxiety and instead brought me to tears. Shocked as I never allowed myself to cry in front of other people, let alone strangers, I wiped them away with a shaky hand. I remember being in that moment, several others surrounded the musician with me, and feeling a sense of togetherness and oneness. Every single one of us experienced similar emotions in 2001. Now, standing in the same spot where so many died, we stood huddled close and let out what felt like a group sigh. Without being fully aware of it, we ourselves to begin to heal collectively.

Our humanity, the source of many terrible things in the world, also allowed us to join hearts and hands. We realized as we made eye contact, the only way to heal is with and through one another.

Where were you, where have you been, where will you go, while dealing with the trauma and grief of September 11th, 2001?

We haven’t actually fully grieved, for the most part. Did we ever truly allow ourselves to or were we forced to move along with this new life, pretending the trauma from that day no longer affected us?

Pause and think about it. Let’s do what we truly never allowed ourselves to before—allow ourselves to sit with our collective trauma. How can you honor the victims and your grief this week?